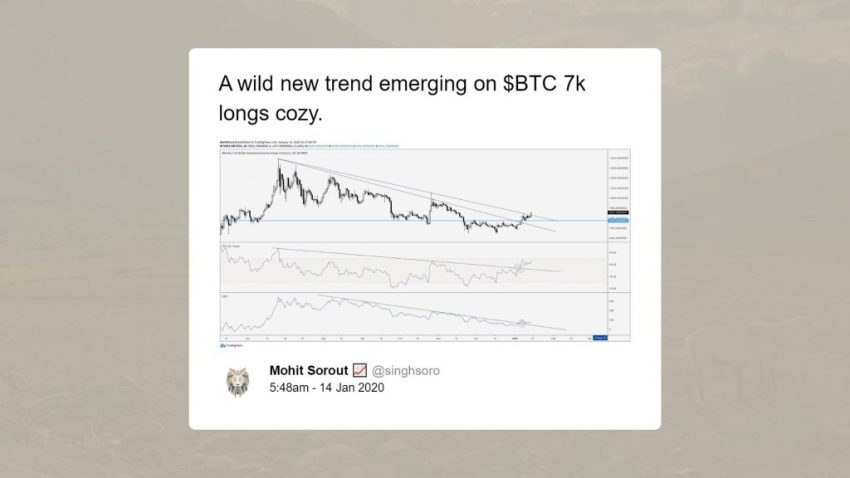 Different technical analysts in the crypto community maintain that the recent rally could have triggered a new Bitcoin bull market. However, others believe that the flagship cryptocurrency is bound for a retracement that could wipe out the gains made over the last few weeks.

A new bull run on the horizon

Bitcoin went through a rally that saw its price rise by nearly 30 percent since Jan. 3. The bullish impulse allowed it to close above the $8,500 resistance level and turn it into support. Breaking through this significant price barrier was seen by some of the most prominent analysts in the industry as a sign that the pioneer cryptocurrency was bound for a further advance.

Mohit Sorout, a partner at Bitazu Capital, pointed out that this price hurdle constrained Bitcoin’s price action for the past seven months. Now that the $8,500 level is serving as support, Sorout argues that a new uptrend is emerging.

Along the same lines, Sawcruhteez, a financial analyst and swing trader, said that Bitcoin could have entered a new bull run. The 14.64 percent upswing that took BTC up from a low of $7,360 to a high of $8,440 last week flipped the parabolic stop and reverse, or “SAR,” from bearish to bullish.

This is the first time since March 2019 that this technical index turns positive, which could signal higher highs for the pioneer cryptocurrency, according to Sawcruhteez.

Despite the bullish perspective from these analysts, others argue that the bull market has not started yet.

TraderX0X0 claims that the $8,500 level represents a massive supply zone, and breaking through it will not be as easy as it seems. The chartist considers this area to provide an excellent opportunity to short Bitcoin. He expects an increase in the selling pressure behind BTC that takes it down to around $7,800.

Like TraderX0X0, the founder and CEO of LVL Chris Slaughter anticipates a downturn in the market. He believes that Bitcoin is completing a fractal, which oversaw the rise to the current price levels. Now, Slaughter suggests that BTC could slowly “bleed to new lows.”

The ambiguity about Bitcoin’s future has the overall market sentiment in a “neutral” stage, according to the Crypto Fear and Greed Index. Time will tell whether the flagship cryptocurrency will be able to break through the next level of resistance that sits around $9,000. Such a bullish impulse would likely invalidate the pessimist outlook. Nevertheless, a spike in the selling pressure behind BTC could push its price downwards.

The post There is a bearish case for Bitcoin despite the recent rally appeared first on CryptoSlate.


Source: CryptoSlate
Original Post: There is a bearish case for Bitcoin despite the recent rally