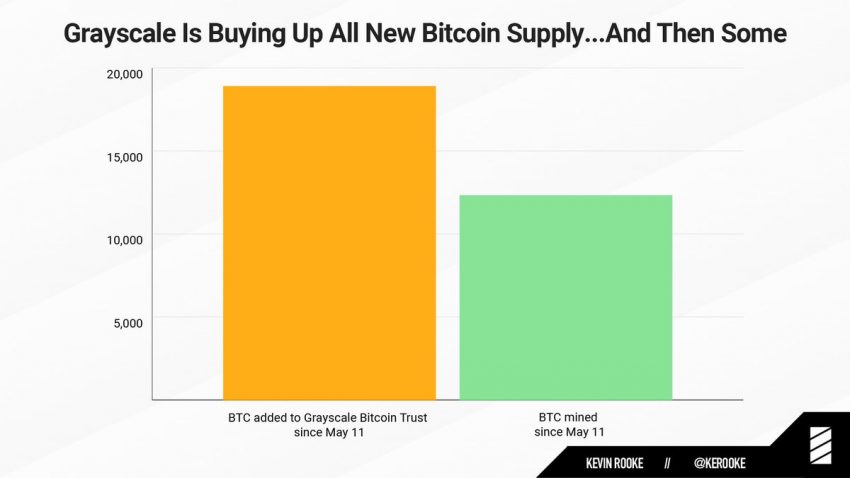 Just over two weeks ago, Bitcoin experienced its third block reward reduction. The “halving,” as the event has been branded, halves the rewards miners get for processing BTC transactions from 12.5 to 6.25 coins per block.

Importantly to the Bitcoin bull case, the effects of the halving are already having an effect on the underlying market.

Grayscale alone has accumulated more Bitcoin than miners since the halving

According to technology analyst Kevin Rooke, there’s been a concerted effort by Wall Street to accumulate BTC over the past few weeks and months.

He cited his analysis, indicating that since the block reward halving on May 11, digital asset fund manager Grayscale Investments has accumulated 18,910 BTC while miners have mined 12,337 BTC. That’s to say, one firm in the BTC market working on behalf of its mostly institutional clients has more than a 50 percent lead over the inflation of the asset.

This is notable because the Bitcoin market is predicated on supply and demand.

Theoretically, if the halving had not happened and Rooke did the same analysis, miners would have mined around 35 percent more coins than Grayscale accumulated.

In decreasing the rewards miners get by 50 percent while demand increases, the supply-demand dynamic of the Bitcoin market gets dramatically skewed in favor of bulls. The graph from Rooke above is a good illustration of this.

Not all of Wall Street is bullish on crypto

Although Grayscale services mostly hedge funds according to its marketing materials, it may not be fair to say that all of Wall Street is bullish on Bitcoin and cryptocurrency.

While many crypto community members expected Goldman to be bullish, they weren’t.

Those running the call, two executives at Goldman Sachs and a Harvard professor, said that BTC does not generate cash flow like stocks, does not properly hedge against inflation risk, and does not “provide consistent diversification benefits given their unstable correlations.”

It isn’t clear how Goldman Sachs’ clients have reacted to the message, but some crypto executives have shot back at the analysts. Cameron Winklevoss — the co-founder of cryptocurrency exchange Gemini — shared:

“Hey Goldman Sachs, 2014 just called and asked for their talking points back…”

The post Effects of the Bitcoin halving are already apparent, and that’s huge for BTC’s bull case appeared first on CryptoSlate.