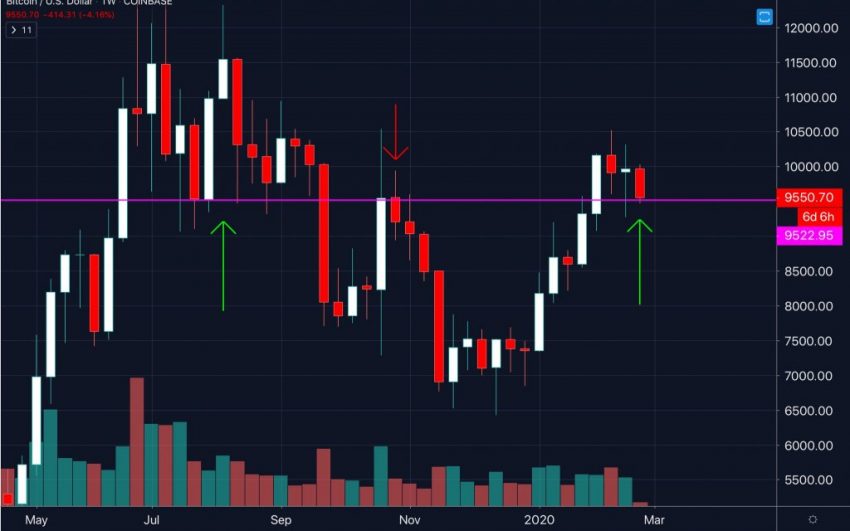 After a futile attempt to kick off another uptrend yesterday, the crypto market has seen an intense selloff that has stemmed from Bitcoin’s move down to $9,500, which has subsequently led most major altcoins to plummet lower.

This bloodbath has led most major cryptocurrencies to form an incredibly close correlation to Bitcoin, and it is highly probable that where the aggregated market heads next will be dependent on whether or not BTC is able to hold above a key level that it is currently trading at.

If the benchmark crypto breaks below this level, it could spark a market-wide selloff that leads many major altcoins to invalidate the bullish market structures they have formed over the past several weeks.

Yesterday, Bitcoin attempted to make a move up to $10,000 that was met with significant selling pressure, subsequently leading BTC to plummet towards $9,500.

This rejection sent shockwaves throughout the aggregated crypto market, with many altcoins that were previously expressing bullishness to see notable selloffs.

At the time of writing, Tezos and Chainlink – two of the best performing altcoins in 2020–are leading today’s drop, trading down 8 percent and 7.5 percent respectively.

Most other altcoins are closely trailing these losses, with Litecoin, EOS, Bitcoin Cash, and others all trading down roughly 6 percent.

The only major cryptocurrency that has been able to dodge losses of this magnitude is Ethereum, which is trading down just under 3 percent.

Today’s selloff has led Bitcoin to a key support level at $9,550 that bulls are currently attempting to defend, and a drop below this level could open the gates for significantly further near-term losses.

Big Chonis, a prominent cryptocurrency analyst, spoke about this key level in a recent tweet, referencing the level seen on the below chart.

“Very important area that Bitcoin bulls want to hold…Has acted as support to resistance and back to support… weekly!”

In the near-term, how deep the ongoing altcoin selloff extends will likely rest largely on whether BTC is able to further extend its upwards momentum, as a failure to do so will likely lead investors to flee their altcoin positions in favor of BTC.