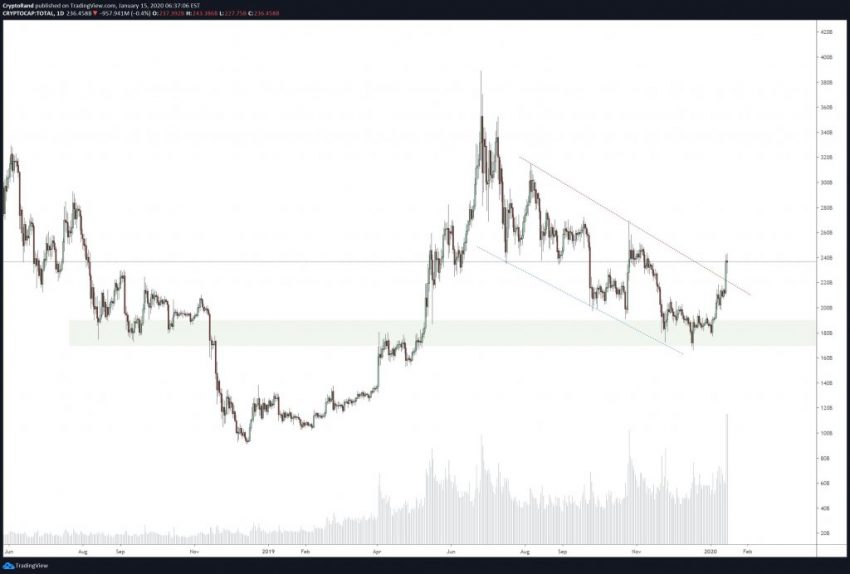 The crypto market’s firm uptrend has allowed multiple major altcoins to begin going parabolic, which to many investors is emblematic of the early stages of the massive bull run seen in late 2017.

The recent series of rallies seen by both Bitcoin and other major altcoins has allowed the market to break out of a key descending channel that was previously guiding it lower, which may signal that this uptrend is just getting started.

Crypto Market Breaks Through a Key Level; Here’s Why This Is So Important

The massive uptrend seen across the aggregated market has primarily been rooted in Bitcoin’s recent rally from its January lows of $6,800 to highs of $8,900.

After tapping $8,900 and facing a minor rejection, BTC’s bulls have been able to support its price within the upper-$8,000 region, pointing to underlying strength amongst buyers.

Bitcoin’s ongoing period of sideways trading within the upper-$8,000 region has provided an ideal backdrop for major altcoins to begin posting some massive gains, which has revitalized investors’ sentiment.

Crypto Rand, a prominent cryptocurrency analyst on Twitter, explained in a recent tweet that the aggregated crypto markets recently broke out of a strong multi-month descending channel, pointing to the possibility that the ongoing rally is just getting started.

“CRYPTO MARKETCAP | Breaking up a 6 months downtrend and beating volume records. Looking awesome,” he said while pointing to the chart seen below.

Investors have long speculated as to when the highly anticipated “altseason” could begin, and it now appears that it could be closer than many people previously thought.

Over the past couple of days, multiple major altcoins have incurred parabolic rallies that have harkened back to late-2017.

Bitcoin SV has been able to climb over 160 percent from its weekly lows, and this is even after considering the sizable retrace it incurred today when it plummeted from intra-rally highs of over $400 to its current price of $306.

DASH is another crypto that is currently in the throes of a parabolic uptrend, as it has been able to surge nearly 200 percent from its weekly lows of under $50, and it is now fast approaching its one-year highs that were set in June of 2019.

Bitcoin’s price action in the coming days will be critical for determining the sustainability of the rallies seen by many altcoins, as any sharp downturn could place the markets back into a bear-favoring downtrend.