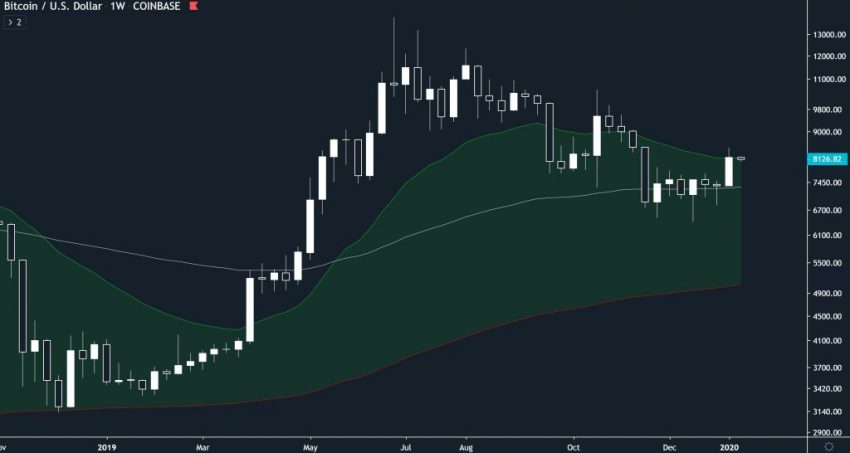 Bitcoin is currently in the process of breaking out of its recent consolidation phase, as BTC’s bulls are pushing the crypto up towards its key resistance levels around the $8,300 region.

Although it does appear that the cryptocurrency is currently struggling to break above its recent highs of $8,500, its current momentum does appear to be emblematic of significant bull strength.

Analysts are now noting that it appears that Bitcoin’s current rally is the result of a recently formed bullish consolidation phase, but buyers must sustain the crypto above a key technical level it just broke through in order for the rally to have long-term significance.

Bitcoin Rallies Towards Resistance as Bulls Attempt to Spark Continuation

At the time of writing, Bitcoin is trading up 4.5 percent at its current price of $8,520, which marks a notable surge from its recent lows of just over $8,000 that were set this past week when bears attempted to thwart BTC’s recent uptrend.

Previously, bulls have attempted on multiple occasions to propel Bitcoin’s price past the resistance that existed around its range highs of $8,400, although each rally proved to be fleeting due to significant selling pressure around its current price levels.

In the near-term, it is highly likely that Bitcoin sees immense volatility, as it is currently breaking out of an extended consolidation phase. Big Cheds, a popular crypto analyst on Twitter, explained in a tweet just prior to the ongoing surge:

Teddy, another popular trader and analyst on Twitter, explained in a tweet from before the recent rally that Bitcoin was struggling to move above its 21EMA, which is a key technical resistance that the cryptocurrency is currently blasting through.

“BITCOIN Weekly closed below the 21EMA and is currently trading below it, again. Failure to break it, price will move to longer and slower ones to confirm trend – in this case: – 89EMA (white line) – 200EMA (red line),” he said while pointing to the levels seen on the below chart.

If bulls are unable to sustain Bitcoin above this level for an extended period of time, the retrace below this level could ignite a massive sell off that sends BTC reeling down to its near-term support levels at $8,000 and $7,700.