Uptrennd the Time Is Now to Get Involved!

My wife Anabell Hilarski and I are pretty well known to be early adopters and users of Steemit. We saw what the possibilities were early on and we put all of our social media focus into Steemit for almost two years. We were even part of the team from September 2016 until June of 2017. It was a great crypto learning experience and we made a considerable amount of Bitcoin during this period.

Fast forward to mid 2018 when the founder of Uptrennd Jeff Kirdeikis first let me know about his new project. I was so involved with other projects that I had little time to look into it but I was proud that one of my crypto friends was taking on such a large task.

Then in the beginning of 2019, I jumped headfirst into Uptrennd. I began reposting all of my CryptoDaily articles to the platform. I engaged some and was able to make it to level 13. I think I did buy about $100 worth of 1UP tokens before they were listed on any exchanges, via the platform. I always believe that if I am going to use something I should support it financially.

Is It Time to Level Up Your Uptrennd Account?

Buying Uptrennd 1 Up Tokens and Leveling Up to Level 22.

Last week the team announced the ability to take 1UP tokens from our MyEtherWallet and deposit them on the Uptrennd platform. I bought 43,000 1UP tokens on IDEX and followed the steps to load them to my account. I then proceeded to level up from 13 all the way to 22. 1UP tokens are an ERC20 token.

My decision to buy 1UP tokens was twofold. Increase my ROI per vote and to support the team. I really believe they are building something great.

An example of ROI.

Below is the multiplier of each vote for each level up to 22. There are many more levels that are increasingly more difficult to achieve. 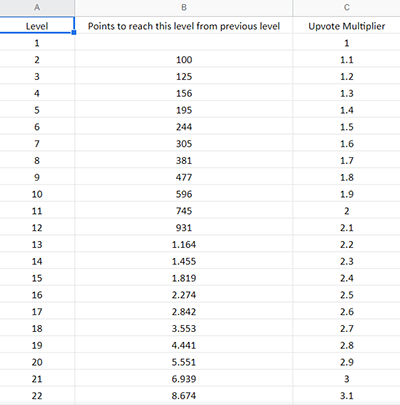 If Uptrennd Continues to Grow I Suspect We Will See Fireworks Regarding the Price of the Token.

Any true content creator will see the value of leveling up their Uptrennd account. I personally am happy with a 3.1X per vote on my content. When I made the call to buy Steem at $.07 and it went to almost $4 I felt like a genius. 1UP could repeat the action in the next crypto bull run.


Source: CryptoDaily.co.uk
Original Post: Is It Time To Buy 1UP Tokens And Level Up Your Uptrennd Account? Why I Think The Time Is Now!